The event is held each year to raise awareness in the Capital Region that recovery, in all its forms, is possible for individuals and families in our community. The march is held to educate and reduce the stigma of addiction, while gathering advocates to celebrate that prevention, treatment, and recovery works.

The event is co-sponsored by Albany County STOP-DWI, the City of Albany, Albany County, and various prevention and treatment providers throughout the Capital Region.

In addition to Golden, remarks were provided by Kathy Sheehan, mayor of the City of Albany; Debra Rhoades, alcohol and substance abuse coordinator of Albany County; Sheriff Craig Apple Sr. from the Albany County Sheriff’s Office; Tim Donovan from the New York State Office of Alcoholism and Substance Abuse Services; and the Hon. Carolyn McLaughlin, president of the Albany Common Council. 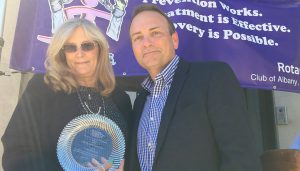 Awards were presented to several notable recipients, including the Lifetime Achievement award to Lisa Beckett, CASAC (pictured). It was presented by Patrick Carrese, executive director of St. Peter’s Addiction Recovery Center (SPARC), who also served as the event’s Master of Ceremonies.