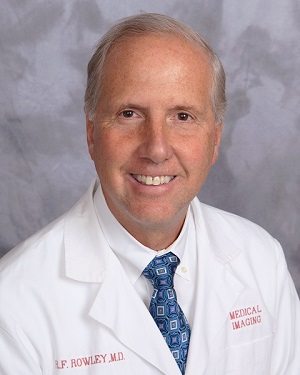 Radiologist Richard F. Rowley, M.D., managing director of St. Peter’s Radiology and treasurer of the board of St. Peter’s Health Partners Medical Associates, has been named the 2015 Physician of the Year by the New York State Society of Physician Assistants (NYSSPA). The society represents the physician assistant profession throughout the state.

In winning the award, Rowley joins “an elite group of outstanding physicians who have distinguished themselves among their colleagues,” said NYSSPA President Jennifer Kelly.

“Nearly 20 years ago, Dr. Rowley was the first physician to create and champion a career pathway for physician assistants who wished to practice radiology in New York state,” said Donald Martin, chief executive officer of St. Peter’s Health Partners Medical Associates. “Today, as a result of his efforts, he is recognized as the physician father of radiology PAs in our state. We congratulate him for receiving this award from the NYSSPA.”

Rowley will be recognized in October at NYSSPA’s annual fall conference in Tarrytown, N.Y.

A native of Albany, Rowley is an expert in body imaging with a particular interest in musculoskeletal MRI. He is board-certified in internal medicine and diagnostic radiology, and served as chief of medical imaging at St. Peter’s Hospital from 1997-2002.

Rowley earned his bachelor’s degree from Harvard University, and his M.D. from the Duke University School of Medicine. His residency was at Yale-New Haven Hospital, in New Haven, Conn., where he served as chief resident in both internal medicine and diagnostic radiology.