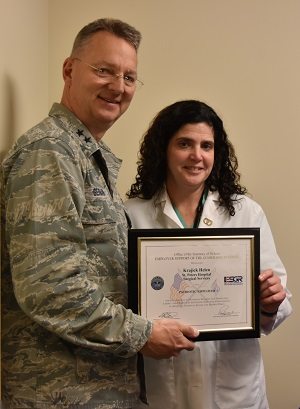 Major General Anthony P. German, commander of the New York Air National Guard, presents Helen Krajick, manager of the operating room at St. Peter’s Hospital, with the Patriot Award in recognition of her support of an employee in the U.S. Armed Forces.

Helen Krajick, RN, MS, CNOR, manager of the operating room (OR) at St. Peter’s Hospital, was recently recognized for her support of an employee in the U.S. Armed Forces.

Representatives from the U.S. National Guard presented Krajick with the Patriot Award for her support of St. Peter’s Hospital OR nurse Donna McCormick, RN, who serves in the National Guard. McCormick recently served in Germany as a member of an aeromedical evacuation unit.

Bestowed by the Employer Support of The Guard and Reserve (ESGR), an office of the U.S. Department of Defense, the Patriot Award is reserved for supervisors who support National Guard or Reserve members through a wide range of measures. These measures range from providing flexible schedules, to granting time off prior to and after deployments, to caring for families, to allowing leaves of absence if needed.

“[McCormick] knows it’s hard on the hospital when she leaves, and that it makes more work for you,” German said. “But she said that you make it easy for her to come back. She never has to worry about her job. We are very thankful for that.”

“The Office of the Secretary of Defense, Employer Support of The Guard and Reserve, recognizes Helen Krajick, St. Peter’s Hospital, Surgical Services, as a patriotic employer for contributing to national security and protecting liberty and freedom by supporting employee participation in America’s National Guard and Reserve Force.”