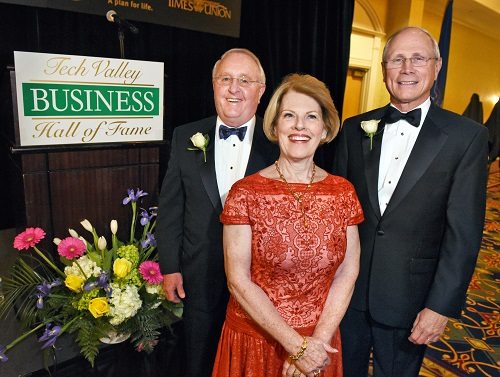 Dr. Reed was one of three inductees, who were selected for their success and dedication toward making Tech Valley a better place to live and work.

At the induction ceremony, held at the Albany Marriott, Dr. Reed was introduced by Andrew Kennedy, president and CEO of the Center for Economic Growth. Kennedy spoke of Dr. Reed’s early career in finance, his pivot to medicine, and his transition from a family practice physician, to a family man, to a health care executive, to leader of the Capital Region’s largest health care network.

Kennedy quoted several current and former members of the SPHP Board of Directors about Dr. Reed’s core role in the 2011 merger of St. Peter’s Health Care Services, Seton Health, and Northeast Health to create SPHP.

“St. Peter’s Health Partner’s board member Mike Keegan said Reed’s strength in the merger talks was that ‘his ego never got into the way of what was the greater good for the community,'” Kennedy said. “[Mentor] Craig Duncan says Reed ‘did what was best for the community; he negotiated with great skill and grace.'”

For his love of new knowledge, his drive to innovate, and his humble, inclusive leadership style;

For his determination to excel, and his entrepreneurial spirit that made him an early success in business and at helping large national  businesses grow;

For his strong belief in a lifetime of constant learning, and a deep devotion to humanity that led him to change paths, mid-career, and become a successful, compassionate and insightful family physician.

For his ability to weld his unique talents in business and medicine to become of hybrid of both disciplines in the world of health care management.

For using all of his special aptitudes in the successful merger of three regional health care systems to create the region’s largest health care system — St. Peter’s Health Partners — and for using his bias toward change to lead this community resource to become a truly integrated health system that will be a national model;

For his unwavering dedication to a future of better and more compassionate health care for our citizens, especially those who are most needy and vulnerable;

For his devoted service to a broad list of community institutions, and to regional and national boards for the health care field, and for his profound love of family….

We are honored tonight to induct James K. Reed, MD, into the Tech Valley Business Hall of Fame.

The Tech Valley Business Hall of Fame is co-sponsored by Junior Achievement of Northeastern New York, Inc., and the Center for Economic Growth.

Induction into the Tech Valley Business Hall of Fame is one of the Capital Region’s most prestigious business awards for outstanding contributions to free enterprise, and for commitment and service to the communities in which these leaders live and work.

A total of 65 distinguished individuals and visionary leaders have been inducted into the Tech Valley Business Hall of Fame since it was founded in 1996. An exhibit honoring all inductees hangs in the Albany International Airport.