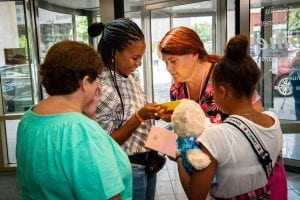 Ella Koenig Belliard de Vaubicourt of France, does not remember her first visit to St. Peter’s Hospital, but her latest is one she will never forget. 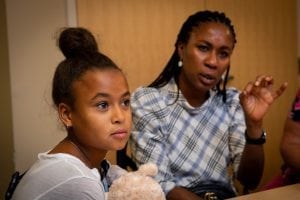 Ella was born at St. Peter’s thirteen years ago, after her mother, Lindsay Shyllon-de Vaubicourt, went into premature labor during a visit to Capital Region from her home in Paris.

“It was probably the hardest thing I’ve ever been through,” Lindsay said. “I almost died of a hemorrhage when I was 27, but that was not even close to what it was like almost losing a child.”

Born 3 months early, Ella weighed just under 2 pounds. After spending 9 weeks in St. Peter’s Hospital NICU, she gained over three pounds and was able to return to France with her family. She then spent another 8 weeks in a hospital in Paris.

Now a healthy 13-year-old girl, Ella returned to St. Peter’s Hospital on Wednesday for an emotional reunion with some of the nurses who cared for her, and to see firsthand the hospital that saved her life. 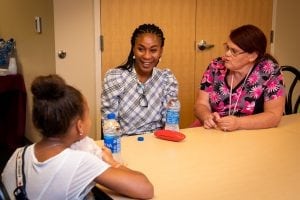 Kelly Maceachron was the first to hug Ella and her mother when they arrived. Maceachron was one of the nurses who helped care for Ella during her critical days in the NICU. She has kept in touch with Lindsay and helped plan this latest visit to St. Peter’s Hospital. Grinning from ear to ear, she couldn’t hide the pride she felt seeing this once tiny patient, now a young woman.

St. Peter’s Hospital is the pair’s first stop during a week-long trip to New York City.

“This is a really fitting beginning to our trip,” Lindsay said. “I always knew one day I would come back here and show her where it all started.” 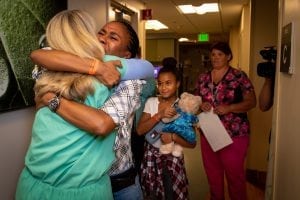 Ella is now in boarding school. Although maybe shorter than some of her peers, she bears little evidence of the fight she endured as an infant, expect for two small scars—one from the surgery she had to fix the hole in her heart, and the other from the IV that fed her vital fluids and nutrients. 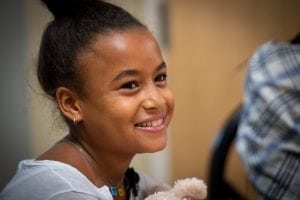 These days, she enjoys playing basketball, singing, and listening to music, much like any other teenager. She has a dream of becoming a model or a make-up artist when she grows up. With all of the cameras snapping photos of her return on Wednesday, she’s already getting a taste of fame.

“I feel like Beyonce,” she said, as she laughed and her thankful mother and former nurses all looked on, smiling, too.