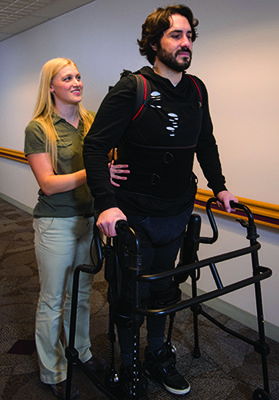 In the spring of 2016, Sunnyview Rehabilitation Hospital acquired new, advanced technology that provides hope and help to patients who thought they would never walk or even stand again.

The EksoGT, developed by Ekso Bionics, is a wearable robotic “gait trainer” exoskeleton that allows patients who have had a disabling injury or illness, such as a stroke or spinal cord injury, to actually stand up and walk.

Originally developed for use in military and industrial settings, robotic exoskeletons have become increasingly useful in the field of rehabilitation. In 2016, the EksoGT became the first robotic exoskeleton to receive clearance from the U.S. Food and Drug Administration (FDA) for use in the treatment of individuals with hemiplegia – paralysis of one side of the body – due to stroke, as well as individuals with spinal cord injury levels to the C7 vertebrae.

More than 20 inpatients and outpatients with stroke, spinal cord injury, or brain injury have used the EksoGT in the first few months since its arrival at Sunnyview. One of these patients is Wayne Cole, 62, of Tribes Hill, New York. On July 21, 2016, Wayne suffered a stroke causing paralysis to his left side. After four days at an acute care hospital, Wayne was transferred to Sunnyview where he spent the next five weeks as an inpatient, regaining his independence, and re-learning how to walk.

“The Ekso has made such a difference,” Cole said. “Not only does it help me with balance and confidence, it actually helps retrain my brain to walk correctly. With the Ekso, I can’t re-learn to walk the wrong way – it forces me to do it the right way.”

“The Ekso supports correct posture and balance, and provides adjustable amounts of power to either side of the body ensuring that patients are ‘equal’ on both sides,” Poetzsch said. “As a result, patients like Wayne can take more ‘quality’ steps with less energy and get in more walking time during therapy sessions. This makes a tremendous difference on the journey to recovery.”

At the time of his discharge on August 31, 2016, Cole was still using a wheelchair. He continues outpatient therapy at Sunnyview, including once a week with the Ekso, and today is walking on his own with the help of a cane. He credits the Ekso for his progress.

“It’s just fabulous technology,” Cole said. “I am so glad and fortunate that Sunnyview had the Ekso. I hope that someday, every rehab facility has one.”

Greg Scepi, 40, of Albany, agrees. In 2015, Greg traveled to Boston for complicated surgery to repair a congenital defect in his spinal cord. While the surgery was a success, it resulted in partial paralysis to his legs and confined him to a wheelchair.

After a stay in a rehabilitation facility in the Boston area, he returned to his home in the Capital Region and chose Sunnyview Rehabilitation Hospital for outpatient therapy. Scepi has fairly typical, though weak, movement in his left leg. His right, however, leg has almost no movement. After acquiring the Ekso, Sunnyview staff determined Scepi fit the criteria to use the exoskeleton. He served as a volunteer for the Sunnyview staff’s initial training on the Ekso, and since then has been working with the technology every week.

“It’s the next best thing to walking on my own,” said Scepi, who is currently working toward his next major goal: walking up steps. “The Ekso has helped me activate muscles and areas of my legs that I was unable to use before. Because of that, I actually have been able to go up a couple of stairs using leg braces. The first time I took those few steps up the stairs, I couldn’t believe it … I was ecstatic.”

Beyond the physical accomplishments, Scepi credits the Ekso for his positive mental outlook. “When I was first in the wheelchair, I couldn’t help but wonder what my life would be like – not being able to walk,” he said. “Now, with this technology, I realize that anything is possible … there is hope. I feel so fortunate that I’m living in a time in history when technology can make such a difference.” 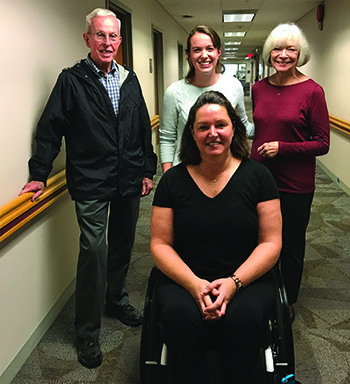 During 2015, Sunnyview advocates Nan and Hugh Murphy were inspired by a patient demonstration of the hospital’s ReWalk exoskeleton and offered to provide philanthropic support if and when Sunnyview needed to purchase another one.

In an effort to deliver the highest quality, evidence-based care, Sunnyview’s Practice Innovations Committee consistently reviews and explores advanced rehab technologies that may be appropriate for patients, and then systematically assesses the new technology to ensure that limited capital expenditures are invested wisely. The assessment includes clinical results, safety, financial considerations, and marketability.

Earlier this year, the committee recommended purchase of the new EksoGT, considered next-generation technology to the ReWalk, and a major step forward in robotic exoskeletons. The Sunnyview Foundation approached the Murphys who reviewed the proposal.

“When we first learned about the Ekso Robotic Exoskeleton and all of the wonderful benefits that it could provide for patients, we felt it was ideal to enhance Sunnyview’s already superb rehabilitation services and facilities. Now, having observed the Ekso in use and hearing the feedback from patients and staff, we are delighted to find that it has exceeded our original expectations,” Nan Murphy explains.

Thanks to their generous gift, the EksoGT was delivered in May 2016. Sunnyview anticipates that over the course of the next year, 75 to 100 patients will benefit from this technology at Sunnyview.

Founded in 1928, Sunnyview Rehabilitation Hospital, located in Schenectady, New York, is a 115-bed hospital specializing in physical rehabilitation. Every year, more than 15,000 individuals come to Sunnyview from across New York’s Capital Region and beyond. Each one has a dedicated team of physicians, nurses, therapists and specialists, all focused on one goal: taking back what was stolen by a stroke, traumatic injury or disabling illness.