Patients with atrial fibrillation (Afib) who are at high risk of stroke now have an alternative to blood thinners. The interventional cardiology team at St. Peter’s Hospital is now performing the minimally invasive WATCHMAN procedure.

The WATCHMAN is a permanent implant that defends against stroke by helping to prevent blood clots from forming in the heart. The device is designed for patients with AFib not caused by a heart valve problem, and can eliminate the need for blood thinner medication.

“We are excited to add this procedure to our program,” said Robert Phang, M.D., FACC, FHRS, a cardiac electrophysiologist with Albany Associates in Cardiology, a practice of St. Peter’s Health Partners Medical Associates. “It’s an option to protect people against stroke and get away from the fears of bleeding, and it opens the door for us to treat patients to reduce stroke as much as possible.”

Dr. Phang and the interventional cardiology team at St. Peter’s Hospital have performed seven WATCHMAN procedures since September 2018. All of the procedures have been successful and are changing lives, including the lives of patients Grant Smith Jr. and Douglas Williams, both of Albany.

For years, Grant Smith Jr. couldn’t go anywhere without a pocket full of Band-Aids. He is on a blood thinner, which means the smallest of cuts could bleed for a long time, and a more significant injury could lead to potentially life-threatening bleeding.

“You’re very wary about getting close to sharp edges or corners,” Smith said. “Even just a small cut takes forever to stop bleeding, and the bruising is terrible. You can’t imagine what it’s like. I’m bruised so badly that people think I have a suntan.”

Smith also has an irregular heartbeat due to AFib, and is at high risk for stroke. Both conditions have limited his lifestyle, but that is now changing thanks to the WATCHMAN.

Dr. Phang implanted the WATCHMAN device in Smith’s heart in October 2018. Smith was back home the next day. In six months, if everything goes according to plan, he will stop taking blood thinners and no longer have to carry around a pocket full of Band-Aids. To him, that means the world.

It is a similar feeling for Douglas Williams. He had the WATCHMAN implanted at St. Peter’s Hospital in November 2018. Because of liver issues and esophageal varices that could bleed, Williams could not tolerate blood thinners. At 71 years old, he did not want to suffer a stroke and be in a position where his wife of 50 years would have to take care of him.

“It gives me a sense of comfort,” Williams said following the procedure.

WATCHMAN is the latest addition to the comprehensive list of procedures offered by St. Peter’s Hospital, which has received multiple recognitions and awards for its compassionate, high-quality, and patient-centered cardiac care.

“We have a world-class cardiac team at St. Peter’s Hospital,” said Steven Hanks, M.D., MMM, FACP, FFSMB, chief clinical officer at St. Peter’s Health Partners (SPHP). “From our electrophysiologists and interventional cardiologists to our sonographers, anesthesiologists, and nurses – all are experts in their field and work together to deliver unparalleled patient-centered care. The addition of this procedure represents St. Peter’s Health Partners’ dedication to offering the latest medical advancements to help save lives.”

What is the WATCHMAN? 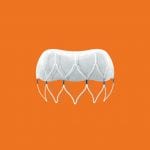 The WATCHMAN implant is roughly the size of a quarter. Implantation does not require open-heart surgery. Instead, the cardiac team inserts the device through a small incision in the patient’s upper leg. Using a catheter-based system, the cardiologist then guides the device through the femoral vein into the left atrial appendage (LAA). The LAA is where more than 90 percent of blood clots form in patients with nonvalvular AFib. Careful imaging with transesophageal echocardiography is crucial for the team to expertly place and secure the device.

Dr. Phang describes the LAA as a small, sac-like structure with a funnel-shaped opening. 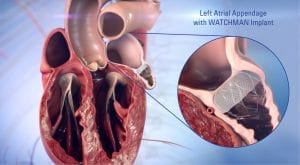 “Basically, this device plugs up that opening, thereby trapping any clots that form and blocking them from leaving the LAA and causing a stroke,” he said.

The procedure is performed under general anesthesia and typically takes about an hour. Patients are usually able to leave the hospital the following day. Once home, patients take a blood thinner medication for a minimum of 45 days to prevent clots from forming until the body’s own tissue seals the area, securely covering the device. Most patients then take a combination of aspirin plus clopidogrel for six months, and then transition to an ongoing aspirin-only therapy.

Who is a Candidate for WATCHMAN?

Patients must meet certain criteria in order to be considered a candidate for the WATCHMAN implant: 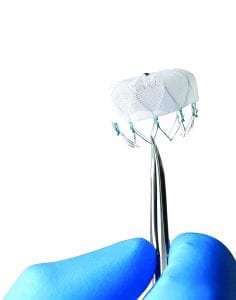 Since opening in 1985, St. Peter’s Cardiac and Vascular Center has been recognized for excellence by health and heart care organizations across the country. Led by a premier team of cardiologists, cardiac surgeons, and vascular specialists, the center is a leader in the Capital Region and one of the most active centers in New York state for the diagnosis, treatment, and rehabilitation of individuals with cardiac and vascular disease.

St. Peter’s Hospital is listed among the top 10 percent of America’s Heart Surgery Hospitals (Society of Thoracic Surgeons); a recipient of Women’s Choice Award for America’s Best Hospitals in Heart Care since 2015; listed among the top six hospitals in the northeastern United States for outcomes from both heart bypass surgery and aortic valve replacement (Consumer Reports); and a designated Heart and Stroke Emergency Center by the New York State Department of Health.

Learn more about cardiac and vascular services at St. Peter’s Hospital at: http://www.sphp.com/cardiac-vascular-sph