Following a year of planning for the transition, James K. Reed, M.D., president and chief executive officer of St. Peter’s Health Partners (SPHP) and St. Joseph’s Health in Syracuse, will be retiring from his position at the end of the year, December 31, 2022.

Reed has spent more than a decade in executive leadership at St. Peter’s, part of a storied, 30-year career in health care. In October 2012, he became the first individual to hold the position of President and Chief Executive Officer for SPHP. Since July 2022, he has also served in the same role at St. Joseph’s Health as part of regionalization efforts by the two Trinity Health ministries.

Upon Reed’s retirement, Steven Hanks, M.D., who currently serves as the chief operating officer for SPHP and St. Joseph’s Health, will be assuming the role of system president and CEO for the region, effective January 1, 2023. 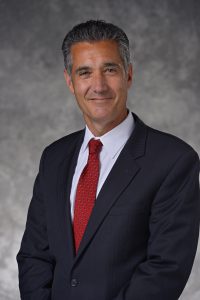 “Leading St. Peter’s Health Partners for the past decade, and more recently St. Joseph’s Health in a regional capacity, has been my honor, and I am grateful to have had the opportunity,” Reed said. “I am thankful to have served with an incredible team of nearly 15,000 colleagues in Albany and Syracuse, working together to provide the exceptional, compassionate care our communities deserve. I remain in awe of the determination and resilience this tremendous team of people has displayed, never wavering in their commitment to keeping each other, our patients, residents, and loved ones safe and cared for.”

“As I look back, what gives me the greatest pride is what our organization has achieved in the face of great adversity and constant change. The team of people we have assembled; the remarkable facilities, programs and services; the dedication to compassionate care – all of this in service of providing the right care, in the right place, at the right time,” said Reed. “I am grateful to have had this opportunity and so grateful to our patients, clients, residents, and their families for trusting us with their most precious resource – their health and well-being.”

During his time at St. Peter’s, Reed succeeded in strengthening the institution’s position across numerous benchmarks: sustained financial stability; national rankings for quality; major capital projects as part of a comprehensive master facilities plan in Albany and Troy; the establishment and growth of St. Peter’s Health Partners Medical Associates; and, finally, the recent restructuring of the institution’s board, leadership and services as part of the regional consolidation of the two health care systems in Albany and Syracuse.

With optimism and a wry sense of humor, Reed tackled challenges both large and small throughout his tenure. Even during the constantly evolving COVID pandemic and the unprecedented strains it was placing on the nation’s health care system, Reed looked for the positive. “I have great confidence in the power of compassion. I see what it can do, every day, in the halls of our various facilities and throughout our system of care,” said Reed. “The exceptional care and gentle, human touch extended by our health care workers and other colleagues has the power to heal. It has the power to provide hope of better days ahead.”

“Jim is fiercely dedicated to the mission of care and ensuring that everyone in the organization provides the highest quality care to the residents of the Capital Region,” said Robert McCormick, chair of the St. Peter’s Health Partners Board of Directors. “An extraordinary leader, Jim’s extensive experience and remarkable vision was crucial to St. Peter’s growth and successes over the past decade. Jim’s unique outlook as both an institutional leader and a physician provided him with crucial insight into the patient care, science, technology, and economic aspects of health care. St. Peter’s is stronger and poised for future successes thanks to his adept leadership.”

“Jim has been integral to the success of St. Peter’s, St. Joseph’s Health and Trinity Health in the region,” said Benjamin R. Carter, EVP and Chief Operating Officer of Trinity Health. “Jim is a bold and courageous leader. His vision was key to St. Peter’s and St. Joseph’s coming together organizationally to build on the strengths of both ministries to provide the best possible care to residents of the Capital Region and Central New York. We will be forever grateful for his contributions to improving the health of these communities, and for his dedication to the mission and values of St. Peter’s, St. Joseph’s and Trinity Health.”

Here are a few highlights of Dr. Reed’s accomplishments from his career, leading teams that implemented numerous innovative programs and quality initiatives:

A Background in Business and in Medicine
Dr. Reed received his undergraduate degree in economics from Amherst College, then attended the Wharton School of the University of Pennsylvania where he received his MBA. He joined the International Paper Company, where he held a variety of finance positions and became the company’s Director of Corporate Finance. He moved to the Union Pacific Corporation as Manager of Strategic Planning and became Director of Acquisitions and Divestitures.

He then attended Cornell University Medical College, where he received numerous clinical prizes and became president of the school’s academic honor society. He completed residency training in Family Practice, receiving the Mead Johnson Award as one of the nation’s twenty best residents, and spent nine years as a partner in a private group family practice in Albany. In 1999, he was named Chief Medical Officer of Northeast Health. In 2001, he added the responsibilities of Chief Operating Officer, and in 2005, he became President and CEO.

Dr. Reed is a member of the Board of Directors of Pioneer Bancorp, former Chairman of the Board of MLMIC Insurance Company (a Berkshire Hathaway subsidiary), and a former board member of HealthNow New York, the Albany-Colonie Regional Chamber, the Fort Orange Club, and the Albany Symphony Orchestra. He also served as a member of the New York State Hospital Review and Planning Council and was a governor’s appointee to the Regional Advisory Committee of the Commission on Health Care Facilities in the 21st Century (the “Berger Closing Commission”).

Dr. Reed lives in Latham, NY, with his wife, Risa. They have three adult children, Jason, Lindsay and Jonathan, and five grandchildren. Dr. Reed and his wife will continue to reside in the Capital Region after his retirement.

About Trinity Health
Trinity Health is one of the largest not-for-profit, Catholic health care systems in the nation. It is a family of 115,000 colleagues and nearly 26,000 physicians and clinicians caring for diverse communities across 25 states. Nationally recognized for care and experience, the Trinity Health system includes 88 hospitals, 131 continuing care locations, the second largest PACE program in the country, 125 urgent care locations and many other health and well-being services. Based in Livonia, Michigan, its annual operating revenue is $20.2 billion with $1.2 billion returned to its communities in the form of charity care and other community benefit programs.