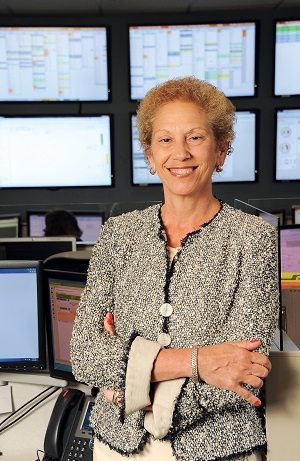 The annual list features women executives at hospitals and health systems across the nation who have established themselves as successful leaders within the ever-changing healthcare industry. Leaders named to the list were chosen by Becker’s Hospital Review editorial staff.

This is the second recognition of Dr. Errichetti by Becker’s Hospital Review over the past few months. In October, the publication included her on its list of “100 Physician Leaders to Know 2015.”

Under the leadership of Dr. Errichetti, St. Peter’s Hospital has been honored with multiple awards and accolades, including being granted recognition in 2015 as a Magnet-designated organization for the third consecutive time. Also in 2015, U.S. News and World Report ranked St. Peter’s Hospital No. 7 among all hospitals in New York state, with a rating of “high performing” in five adult specialties – gastroenterology and GI surgery, orthopedics, geriatrics, nephrology, and pulmonology – and a rating of “high performing” in four common adult procedures and conditions – heart bypass surgery, heart failure, hip replacement, and knee replacement.

Other honors bestowed upon St. Peter’s Hospital under Dr. Errichetti’s leadership include a “three-star” designation from the Society of Thoracic Surgeons in 2015 for two open heart surgery procedures, recognition in 2014 as a NICHE (Nurses Improving Care for Healthsystem Elders) Designated Hospital, and in 2014 receiving the Beacon Award for Excellence in Intensive Care Unit Care.

Dr. Errichetti is the 2015 recipient of the Key Bank Key4Women Achieve Award, and was named one of the five winners of the 2015 Women Who Mean Business award from the Albany Business Review. She is the 2010 recipient of the Chicago Health Executives Forum Healthcare Leadership Award, the 2010 Lake County YWCA Women of Achievement Award for Health Care, and the 2010 Community Service Award from the GLMV Chamber of Commerce.