St. Peter’s Health Partners (SPHP) is proud to recognize a group of extraordinary nurses at St. Peter’s Hospital by presenting them with The DAISY Award. 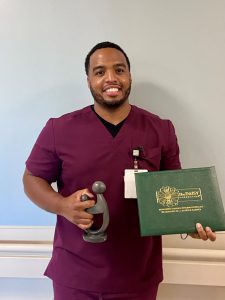 For more than 20 years, The DAISY Foundation has been recognizing the compassion and skill direct care nurses bring to their patients every day. The award has been adopted by health care facilities across the United States and is a part of the culture at SPHP.

In May, SPHP expanded its recognition program for registered nurse colleagues to include The DAISY Nurse Leader Award and The DAISY Team Award, in addition to two Extraordinary Clinical Nurses.

In nominating Renard Walker, a patient’s family member wrote about Renard’s exceptional care saying, “All of my dad’s nurses that I have met have given him good care, but Renard has shown him real compassion and empathy in addition to taking care of his medical needs.” 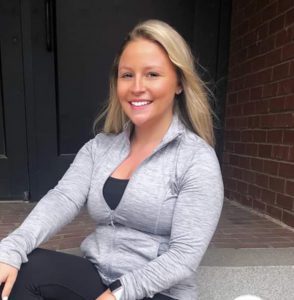 A husband and wife came across Makenzi Caswell during a visit to the Emergency Department. In their nomination letter they wrote that listening to Makenzi care for a nearby patient in distress was “one of the most heartwarming experiences” of their lives. They continued, “As heroes often do, she downplayed her actions, saying that ‘it was her job’.” They added that what they witnessed “was well above and beyond ‘a job,’ it was humanity at its finest.”

Maura Tuffey was praised for her outstanding leadership throughout the COVID-19 pandemic. The colleague who nominated her wrote that during one of the most infectious surges, when more than 75% of their staff had contracted the virus, Maura kept them updated on CDC guidelines, made sure they had the best equipment possible, showed concern for each staff member, and even made sure to contact every single nurse at home to make sure they were ok. “As a leader we relied on Maura,” she wrote. “Her support during this time was unprecedented.”

A group of Nursing 1 students called the decision to nominate the nurses of 5 Brady Farrell for The DAISY Team Award “a no-brainer.” The students thanked the nurses for graciously taking them under their wing despite the many daily challenges during their 12-hour shifts and said they couldn’t think of a better team who is more deserving.

In addition to the winners, nearly 50 other nurses across St. Peter’s Hospital were nominated for the awards.

“Congratulations to all our nurse winners and nurse nominees,” said Michael Finegan, president of acute care for SPHP. “Nurses are heroes every day. It’s important that they are recognized for their dedication, remarkable skill, and endless compassion. The DAISY Award not only provides for us a way to do that, but for our patients as well.”

Additionally, the Crisis Unit at Samaritan Hospital was honored with The DAISY Team Award for working tirelessly to provide a safe and compassionate environment for a vulnerable population. The team was credited with evaluating an unprecedented number of patients, specifically adolescents, while navigating limited inpatient and outpatient resources to support those experiencing a behavioral health crisis. 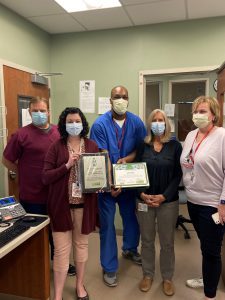 DAISY is an acronym for Diseases Attacking the Immune System. The family of Patrick Barnes, who died at age 33 of complications of Idiopathic Thrombocytopenic Purpura (ITP), created The DAISY Award to honor his memory and recognize the healing work of the nurses who had cared for him and continue to care for patients everywhere.

There are more than 2,000 health care facilities in all 50 states and 14 other countries committed to honoring nurses with The DAISY Award.