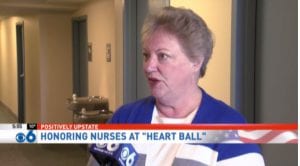 Norine Kelsey, RN, of St. Peter’s Cardiac Rehabilitation & Wellness, will be honored with the Donald Led Duke Heart Hero Award. Her son, Mark, who is a cardiac nurse at St. Peter’s Hospital, spoke to reporter Julia Dunn about his mother’s contributions to nursing throughout her long career.

“Not a lot of people have the opportunity to professionally work with one of their parents, and it’s definitely been one of the highlights of my career,” Mark said.

It’s not just her son’s life Norine’s helped change. It’s also the thousands of patients and families she’s worked with in a career spanning almost 50 years. On Saturday, she’ll be honored with the Donald LeDuke Heart Hero award.

“I always put myself into their shoes. And think, how would I like to be treated?” Norine said.

It’s a selfless attitude shared by other cardiac nurses we met at St. Peter’s.

“They’re usually unsung and unappreciated,” said Michael Finegan, President of Acute Care at St. Peter’s Health Partners. “We often recognize physicians and community leaders but the chance to get the front line healthcare worker the opportunity to be recognized is really important. “